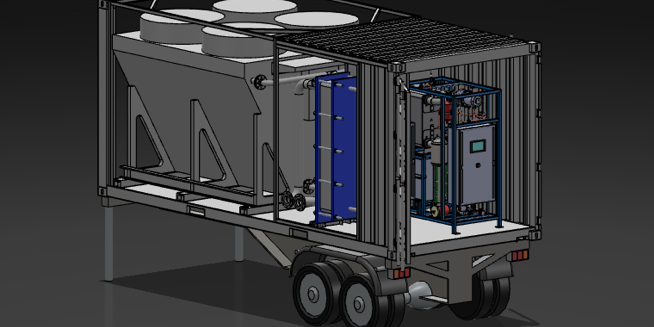 The main objective is to adapt the ORC to the specificity of geothermal application, especially through the sourcing and testing and testing of adapted, cost-effective, heat exchangers technology in order to make the ORC compatible with geothermal water chemistry originating from various geological conditions. The ORC has to be tested in one volcanic demo-site, two sedimentary demo-site and two granitic demo-site.

Enogia has launched the factory acceptance tests of the ORC module which will soon be installed in Chaunoy on the Vermilion site (one of the sedimentary demo-site). The functional tests have been validated and the performance tests are in progress.

The ORC is equipped with a plate and cassette heat exchanger. This titanium evaporator allows to overcome the constraints of corrosion caused by the geothermal fluid. This ORC will validate the production of electricity on this type of installation.This ORC will be installed at a low-flow, low-temperature (90 ° C) site. The electricity production is estimated between 14 and 18 KW, depending on the ambient temperature.
In addition, as part of the project, tests will be realized on samples of materials to find the more suitable heat exchanger material adapted to the specificity of this geothermal environment. A detailed analysis will be carried out on the Vermilion demonstration site after the 5 months of testing.

Using Mohr diagrams to make predictions about fracturing in the sub-surface
10/27/2021
Categories
Recent Articles
Search
Go to Top
We use cookies to ensure that we give you the best experience on our website. If you continue to use this site we will assume that you are happy with it.Ok