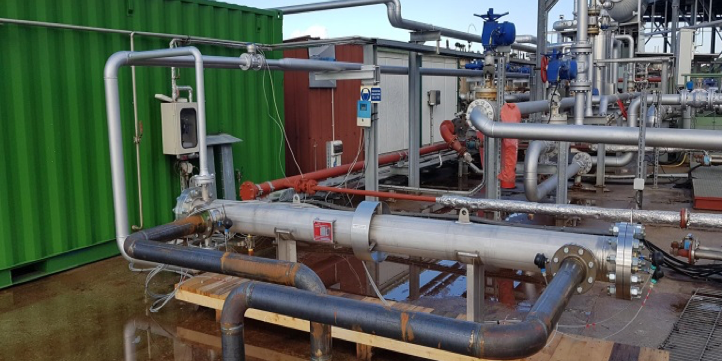 In order to quickly boost deep geothermal energy production, MEET project is aiming at valorising low temperature resources in existing subsurface facilities. Regarding EGS power plants, MEET envisions to extract more energy by reinjecting the brine at lower temperature. In that framework MEET is working on Soultz-sous-Forêts power plant which is currently reinjecting at an average temperature of 70°C and targets to decrease this temperature by 30°C (i.e. down to 40°C). So far, the lack of experiments with regards to the formation of scaling at a temperature lower than 60°C has led to setting this temperature as the admitted lower injection temperature limit. Indeed silica content has been identified as one of the mineral elements dissolved in the brine and it is likely that cooling the brine below 45°C might trigger the deposition of new amorphous scaling containing silica that is very hard to clean. Therefore, a prototype heat exchanger has been designed by ES-Géothermie to evaluate the feasibility of this colder reinjection (Ravier et al., 2019). It was manufactured with 6 different metallurgies for the tubes to find the most adequate alloy regarding corrosion and scaling phenomena. This heat exchanger was operated on site for 3 months (February to April 2019) using 10% of the flow mass developed by the power plant.

After three months of continuous operation, the prototype heat exchanger has been stopped and was partially dismantled in order to analyse scaling and corrosion effects. As a first approach, the quantities of scaling formed in the tubes and their stickiness have been assessed. It turns out that Ti Gr 2 and Alloy 825 (Nickel) are not recommended due to high quantity of scaling and difficult cleaning whereas Super Duplex stainless steel SDX 2507, which is currently used in the Upper Rhine Graben geothermal plants, appears to be a good alternative to harness the brine temperature down to 47.5°C, whereas austenitic stainless steel 254 SMO could be an interesting alternative for new plants when considering to reinject the brine at 40°C, even though the quantities of scaling formed in the tubes increase at this temperature. Currently, more detailed analyses to identify scaling composition and better assess corrosion rates are performed by UCP and ICI respectively.

More information can be found in the public deliverable D6.5 « Summary of additional heat production capacities at the Soultz-sous-Forêts site ». These results will be presented at the upcoming World Geothermal Congress in April 2020.

MEET Geothermal Winter School 2021
09/24/2020
Web-based mapviewer: presentation of the first version
09/24/2020
DMS-TOUGE: what is it and how can you use it?
09/24/2020
The small scale ORCs have finally reached their demo-sites
09/24/2020
Producing electricity from oil wells: early results from ongoing field test in France
09/24/2020
Categories
Recent Articles
Search
Go to Top
We use cookies to ensure that we give you the best experience on our website. If you continue to use this site we will assume that you are happy with it.Ok